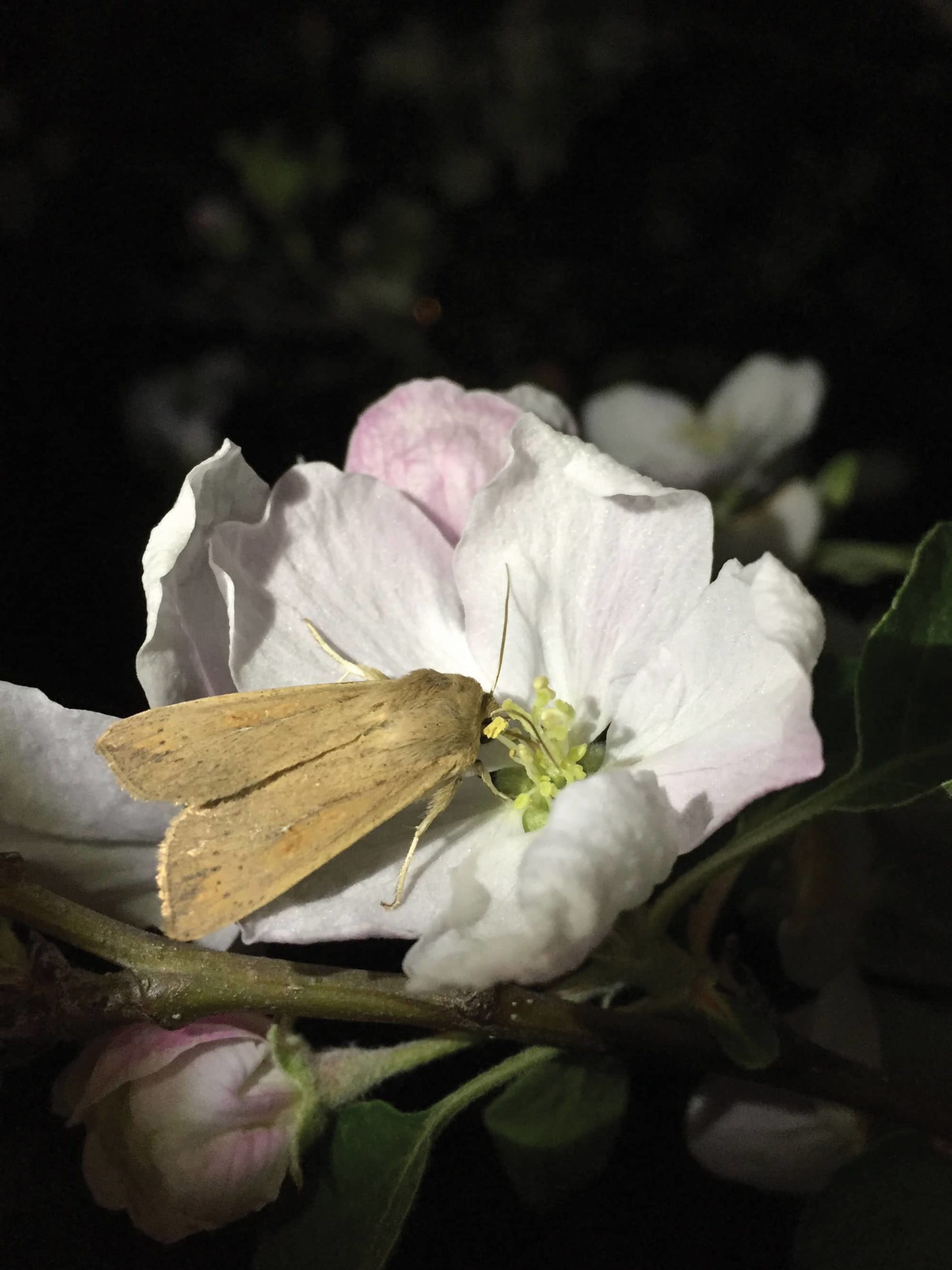 For millions of years, there has been a night shift at work pollinating flowering plants and fruit trees. But only recently have these workers started to get a little credit for their contributions to agriculture.

Moths may not produce a sweet treat like their daytime counterparts, the honeybees, but pollination research on apples conducted by Arkansas Agricultural Experiment Station researchers shows nocturnal pollinators are equally as important to nature’s system with flowering plants.

Highlighted in July 2021 by the Journal of Economic Entomology and the Entomological Society of America, the three-year study led by Stephen Robertson, former University of Arkansas graduate assistant in the department of entomology and plant pathology, found nocturnal pollinators like moths are just as capable of pollinating apple trees at night as are bees during the day.

“They are the unsung heroes of pollination,” Robertson said. “If you look at the diversity and the sheer numbers of moths out there, the other pollinators pale in comparison. So, you’re talking about a massive group of animals that probably contribute not just to fruit crops or crops in general … but to pollination overall they may just be the most important pollinators as a group.”

The entomologist noted in his dissertation that the world’s food growers are shifting to more food crops that require pollination, including soybeans. His study sheds valuable light on the night flyers as being more beneficial to production stability than previously recognized.

Evidence that moths are not given much credit as pollinators can be seen in a June 2021 U.S. Environmental Protection Agency website posting with the headline “Pollinator Health Concerns.” Of all the pollinators mentioned by the EPA—from wild bees and ants to wasps, lizards, birds, bats and butterflies—moths are excluded.

Robertson points out in his study that there have been several mentions of the importance of nocturnal moths as pollinators in scientific literature since the mid-1980s, but the overall lack of studies on their impact on crop production has generated a bias in understanding.

Robertson credits a study led by Romina Rader at the University of New England as a backup. Rader and her fellow researchers found that non-bee insects positively contribute to crop pollination. The Rader study published in January 2016 showed that non-bee pollinator services equaled those provided by bees. Although the non-bees were less effective than bees on per-flower visits, they made more visits to compensate. Non-bee pollinators mentioned by Rader included “flies, beetles, moths, butterflies, wasps, ants, birds and bats, among others.”

Moths are highly specialized insects for pollination. Some nocturnal moths even have a specific relationship with some plants that depend on them for reproduction. Robertson said the classic example of this is between Darwin’s star orchid and the hawkmoth. Other plants are attractive to daytime pollinators, but receive the best inputs from nocturnal moths, he added.

Robertson said more studies are needed on nocturnal pollinators to get a better grasp of their abilities.

“It’s a wide-open door,” Robertson said. “Because of the impact of apples, I think this kicks the door wide open. I suspect everything that has been done on diurnal pollinators can be done with nocturnal pollinators, so we’re talking a massive branch of unstudied, unsung heroes.”